The principal roles of traditional Chinese theater can be divided into four main types: sheng, dan, jing, chou. It is “… a classification which, in theatrical circles, is always given in that order and formerly signified the relative importance attached to the roles by theatergoers. In actual fact each role is indispensable to the construction of the plays, but formerly the sheng roles included the greater number of principal parts and were therefore more often the prerogative of the leading actors. Each of these four roles is subdivided into variations of the type…” (A. C. Scott, The Classsical Theatre of China, New York: The Macmillan Company, 1957, p.64.)

“The sheng are always male characters who represent scholars, statesmen, warrior patriots, faithful retainers and the like. The sheng roles are described as wu sheng if the part requires stage fighting and acrobatics, and wen sheng if the part is one for signing and acting only.” (A. C. Scott, The Classsical Theatre of China, New York: The Macmillan Company, 1957, p.66)

“The actor who plays these parts must, before everything else, have an excellent voice, for all characters in these classes have long singing parts. The signing style of the sheng actor is marked by a rich almost baritone quality and at the same time he must maintain a delicate but perfect synchronization of gesture and pantomime with his song. The glance of an eye, the crook of a finger, all accord perfectly with the music and therefore the emotion of the occasion.” (A. C. Scott, The Classsical Theatre of China, New York: The Macmillan Company, 1957, p.66.) This role type can be further divided into two: 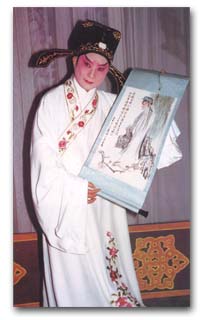 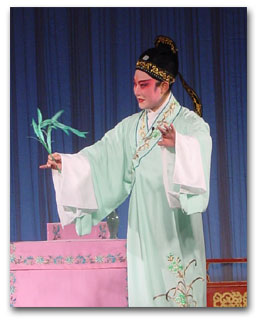 “The Hsiao sheng are always young men, the princes, dandies, lovers and poor young scholars of the stage. They never wear beards. … The technique of the Hsiao sheng is unusual for it mingles the vigour of the male roles with the softness of the female parts, the singing and speaking voice combines the sheng actor’s vocal modulations with the falsetto quality of the tan actor. This is also the case with the movements and gestures, a glance at the section on technique will show how often the Hsiao sheng and tan use a similar method.” (A. C. Scott, The Classsical Theatre of China, New York: The Macmillan Company, 1957, p. 67.) <![if !supportLists]> 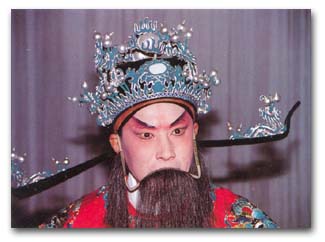 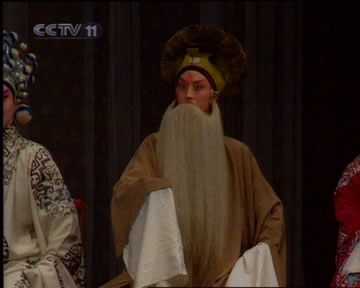 “The lao sheng are aged men, often of the poorer classes, peasants or retainers. Their singing is noted for the great pathos of its style.” (A. C. Scott, The Classsical Theatre of China, New York: The Macmillan Company, 1957, p.67.)

The dan actors play all the women’s roles, and can be further divided into various types. The followings are two major types. 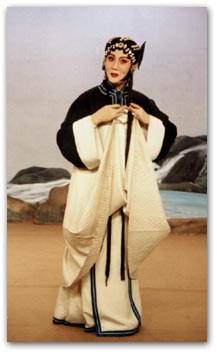 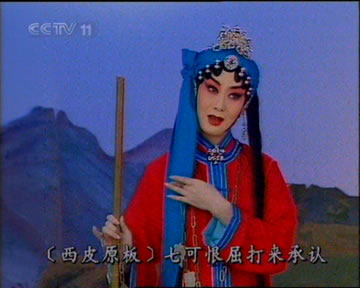 “The ch’ing i parts lay great importance on singing but require none of the more vigorous forms of movement like fighting and gymnastics. The actor who plays this part must, before all else, have a first class singing voice suitable for the plaintive melodies typical of the ch’ing i repertoire. This role portrays types like the faithful wife, filial daughter or lover in distress. The movements are demure but graceful, the feet are kept close to the ground and the hands in an elegant position, often crossed on the waist. The eyes are kept lowered or directed straight in front; there is not the slightest hint of coquettishness or freedom of behavior. The singing voice is high and clear, it is in fact a falsetto, and although it must have strength, it is not robust. The ch’ing i symbolizes the good and virtuous woman as defined in the society of old .” (A. C. Scott, The Classsical Theatre of China, New York: The Macmillan Company, 1957, pp.72-73.) b. Guimen dan The guimen dan is the demure, respectable, young lady, usually from a family of high status. The actor playing this role type requires almost the same techniques as ch’ing i, but expresses them in a more dignified manner.   3. Jing / ching 淨 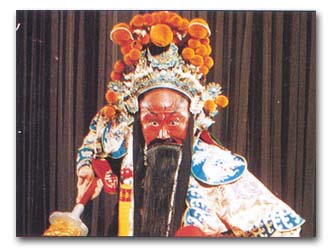 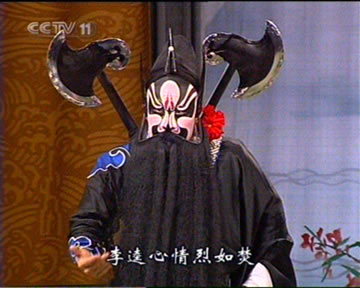 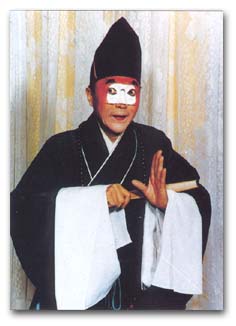 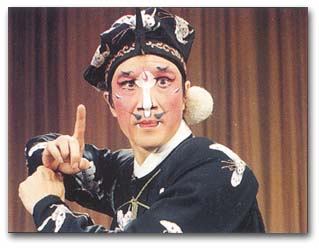 “The ch’ou is the clown or comic of the Chinese stage. He is not necessarily a fool and may portray a serious or evil character as against a merely ribald one. … He is at liberty to improvise as the mood strikes him, the spontaneous quip and local jest are both a part of his technique and he takes the audience into his confidence with a bat of the eyelids or a knowing leer. In all his interpretations there is combined the skill of the mimic and the acrobat. His make-up is always characterized by a white patch round the eyes and nose, Sometimes various markings in black are superimposed. The main role divided into two styles, wen ch’ou and wu ch’ou. The former may be a character such as a woodcutter, a jailer, a watchman or a servant, while the latter is an armed character such as a minor military official who performs the acrobatics connected with fighting and horse riding.” (A. C. Scott, The Classsical Theatre of China, New York: The Macmillan Company, 1957, pp.76-77)